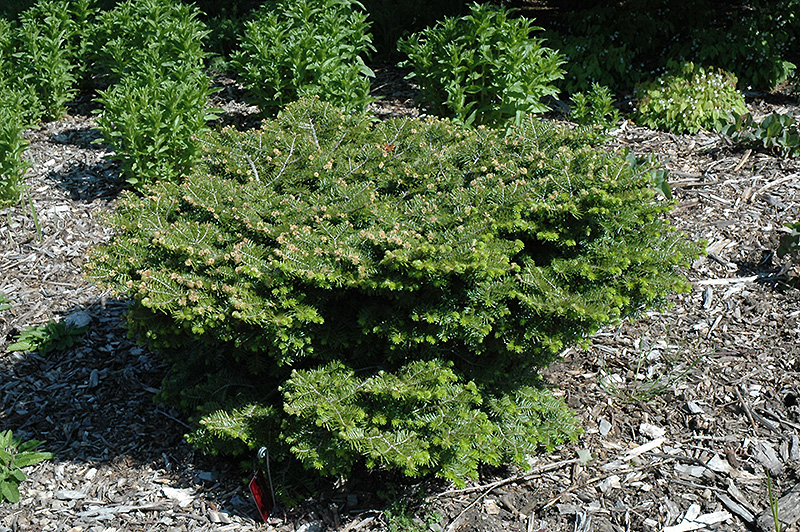 This dwarf fir is wider than tall with a nice spreading habit; layered branches with mid-green needles;compact form is perfect for smaller gardens, makes a wonderful evergreen accent plant

Holden Arboretum Dwarf Silver Fir is a dwarf conifer which is primarily valued in the landscape or garden for its interestingly mounded form. It has attractive forest green evergreen foliage. The needles are highly ornamental and remain forest green throughout the winter. The smooth gray bark adds an interesting dimension to the landscape.

Holden Arboretum Dwarf Silver Fir is a dense multi-stemmed evergreen shrub with a mounded form. Its relatively fine texture sets it apart from other landscape plants with less refined foliage.

This is a relatively low maintenance shrub, and usually looks its best without pruning, although it will tolerate pruning. It has no significant negative characteristics.

Holden Arboretum Dwarf Silver Fir will grow to be about 8 feet tall at maturity, with a spread of 10 feet. It tends to fill out right to the ground and therefore doesn't necessarily require facer plants in front, and is suitable for planting under power lines. It grows at a slow rate, and under ideal conditions can be expected to live for 50 years or more.

This shrub does best in full sun to partial shade. It does best in average to evenly moist conditions, but will not tolerate standing water. It is not particular as to soil type or pH. It is somewhat tolerant of urban pollution, and will benefit from being planted in a relatively sheltered location. Consider applying a thick mulch around the root zone in both summer and winter to conserve soil moisture and protect it in exposed locations or colder microclimates. This is a selected variety of a species not originally from North America.

Holden Arboretum Dwarf Silver Fir makes a fine choice for the outdoor landscape, but it is also well-suited for use in outdoor pots and containers. Because of its height, it is often used as a 'thriller' in the 'spiller-thriller-filler' container combination; plant it near the center of the pot, surrounded by smaller plants and those that spill over the edges. It is even sizeable enough that it can be grown alone in a suitable container. Note that when grown in a container, it may not perform exactly as indicated on the tag - this is to be expected. Also note that when growing plants in outdoor containers and baskets, they may require more frequent waterings than they would in the yard or garden.